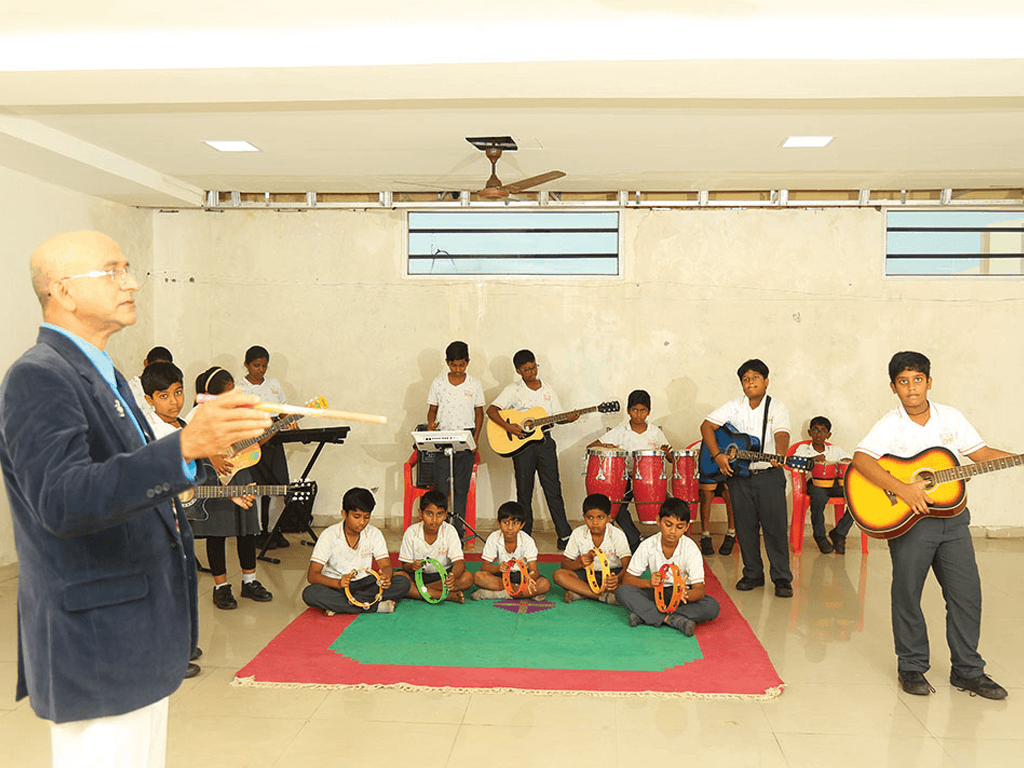 The Music Club serves as a platform for peers to bond over music, in terms of performing, collaborating, learning, sharing, exploring and creating, by assimilating the vast and diverse tastes present in such a culturally charged setting. It is a place where students can express themselves uninhibitedly, relieve stress and build long-lasting memories to cherish forever. 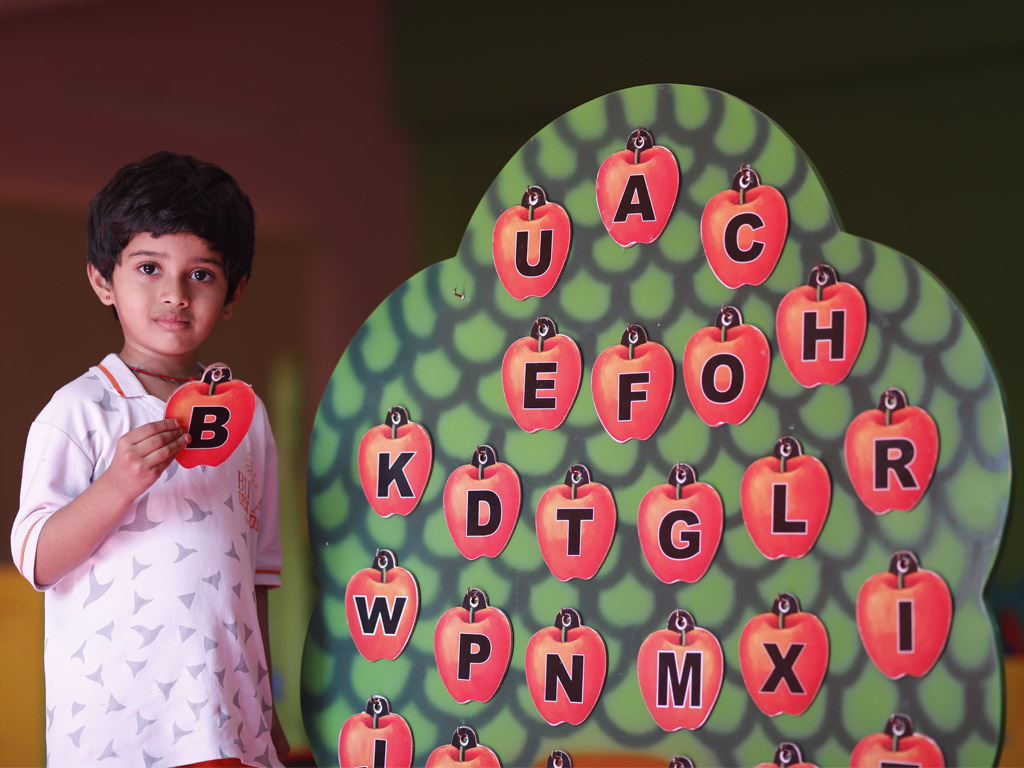 Drama is the specific mode of fiction represented in performance: a play, opera, mime, ballet, etc, performed in a theatre, or on television. Considered as a genre of poetry in general, the dramatic mode has been contrasted with the epic and the lyrical modes. The term "drama" comes from a Greek word meaning "action" which is derived from "I do". The two masks associated with drama represent the traditional generic division between comedy and tragedy. 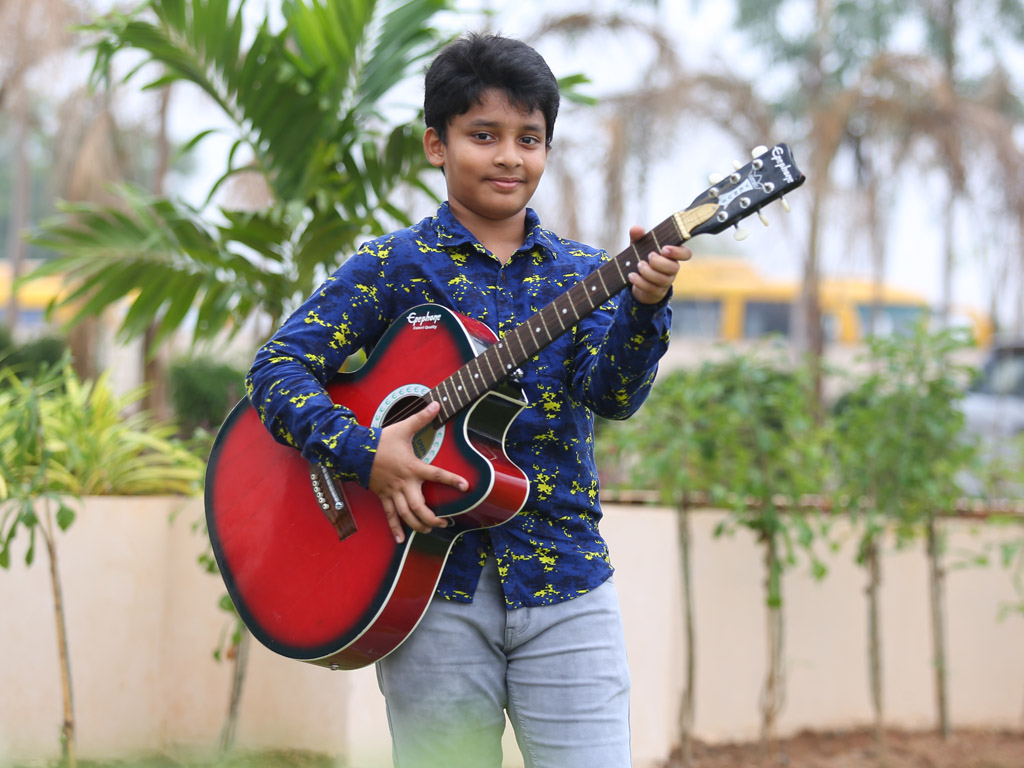 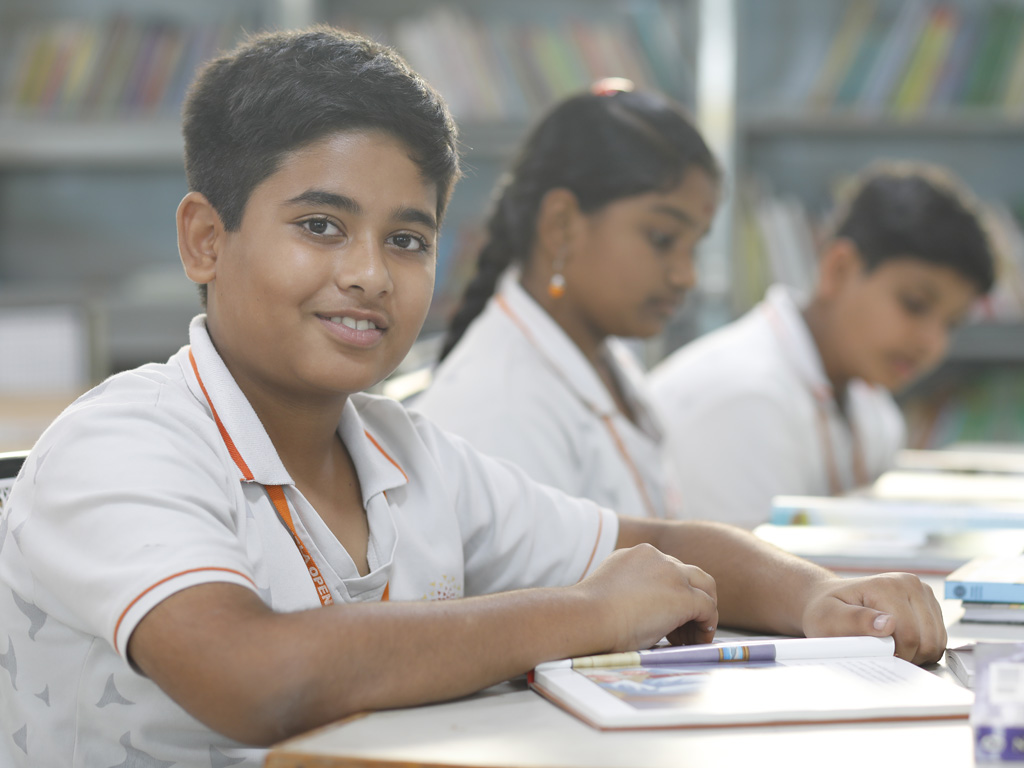 Science club Activities with illustration for problem solving and psychomotor skill development The scientific and technological advancement of today is a long forward journey form stone age. Each individual has his interest’s talents and abilities now a days are found to exhibit growing interest and means of stimulating group participation and mobilizing interest in learning science organizing science clubs is one among such activities. Thorough activities of a science club, learning of science becomes joyful. 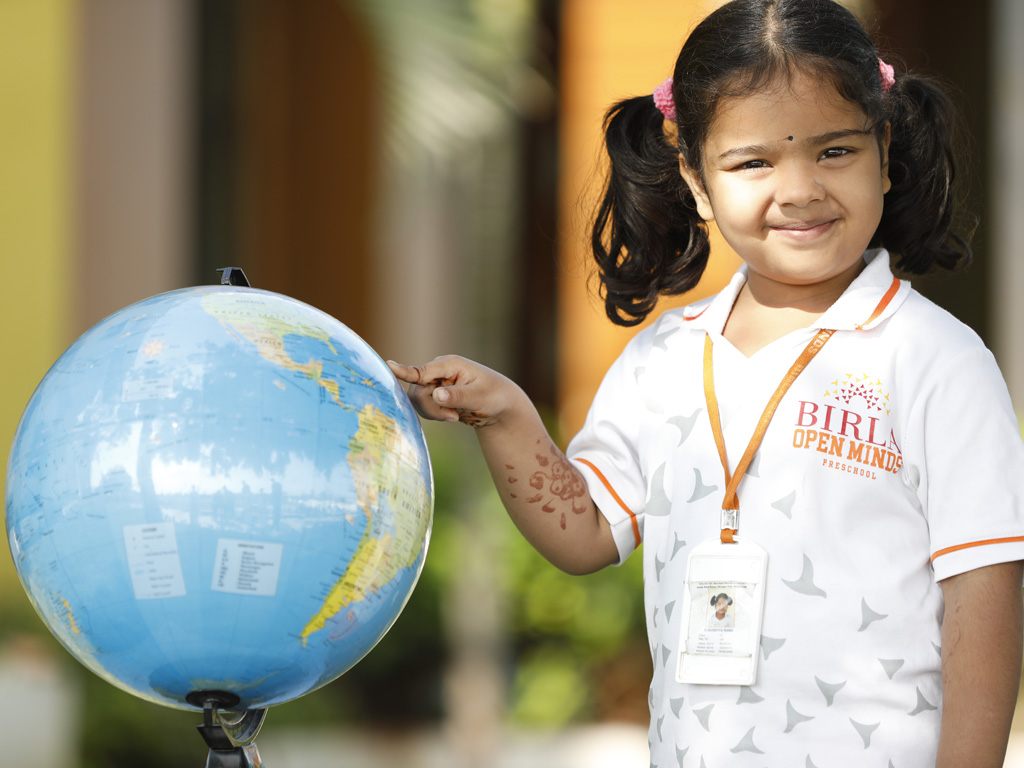 Club has been founded to develop the social cooperation spirit in student, to help people who need directly or indirectly by means of charity organizations and activities. Build responsiveness among students about the social responsibilities. We motivate them to involve in extracurricular activities ahead of academic part and serve the society in its possible need and perform the responsibilities to the society.These activities develop leadership skill in the students and promote the intercultural relations and welfare of students the main intension of these activity Sharing is Caring. 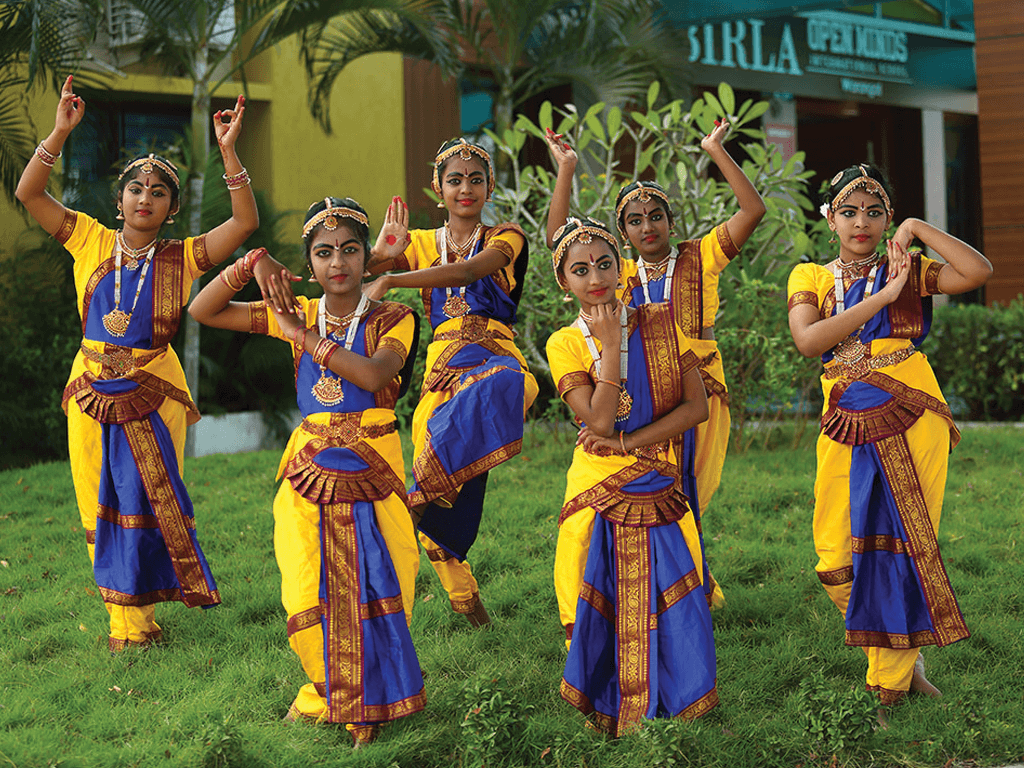 Dance is a performing art form consisting of purposefully selected sequences of human movement. This movement has aesthetic and symbolic value, and is acknowledged as dance by performers and observers within a particular culture.Dance can be categorized and described by its choreography, by its repertoire of movements, or by its historical period or place of origin. 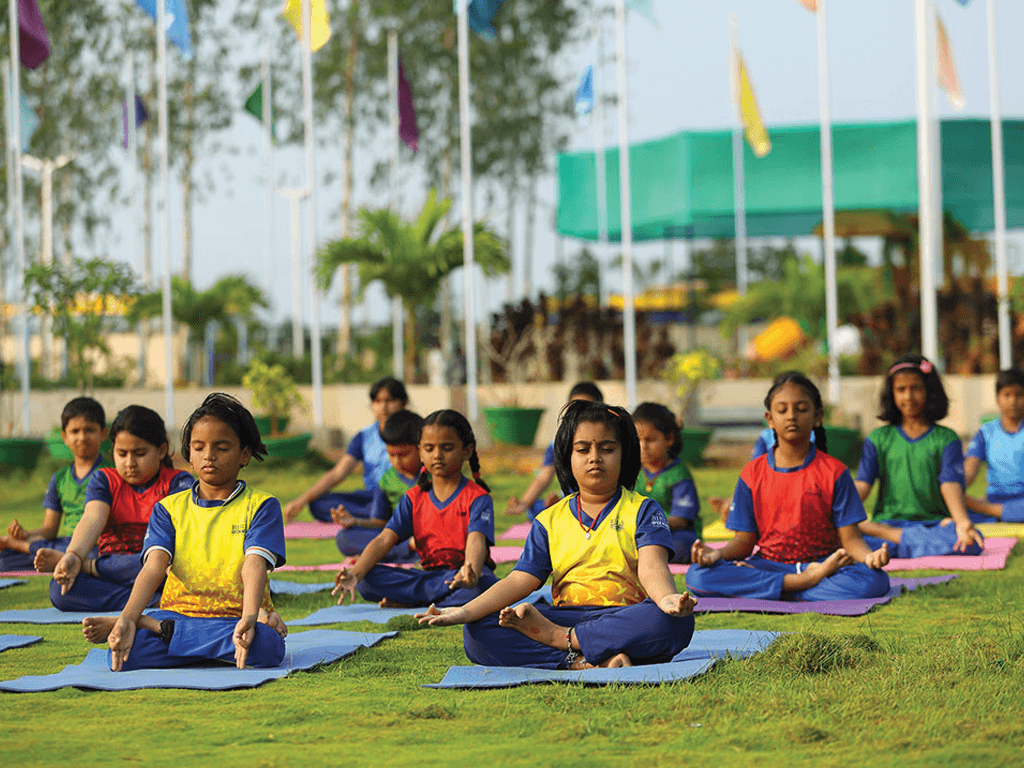 Yoga is an old discipline from India. It is both spiritual and physical. Yoga uses breathing techniques, exercise and meditation. It helps to improve health and happiness. Yoga is the Sanskrit word for union. Patanjali was a pioneer of classical yoga. He defined yoga as "the cessation of the modification of the mind". A person doing yoga will move from one posture to another.This helps to Reduce the stress and improve the concentration. 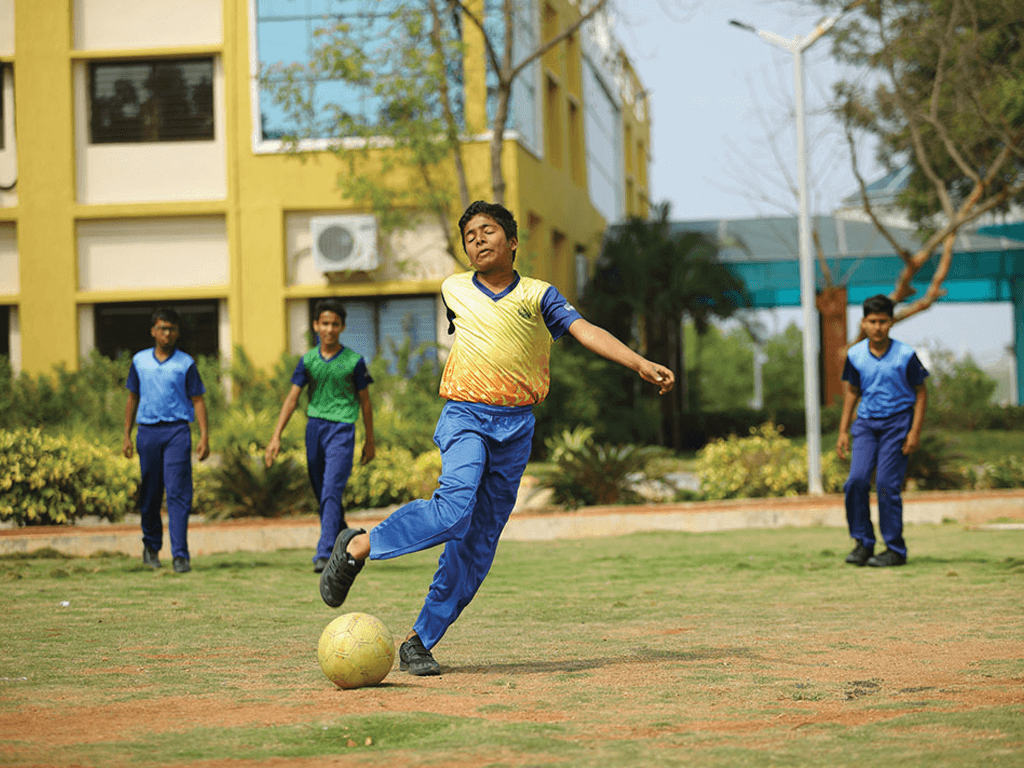 Football is the world’s most popular ball game in numbers of participants and spectators. Simple in its principal rules and essential equipment, the sport can be played almost anywhere, from official football playing fields to gymnasiums, streets, school playgrounds, parks, or beaches. Football is a family of team sports that involve, to varying degrees, kicking a ball to score a goal.By this the co-ordination between the students will be developed. 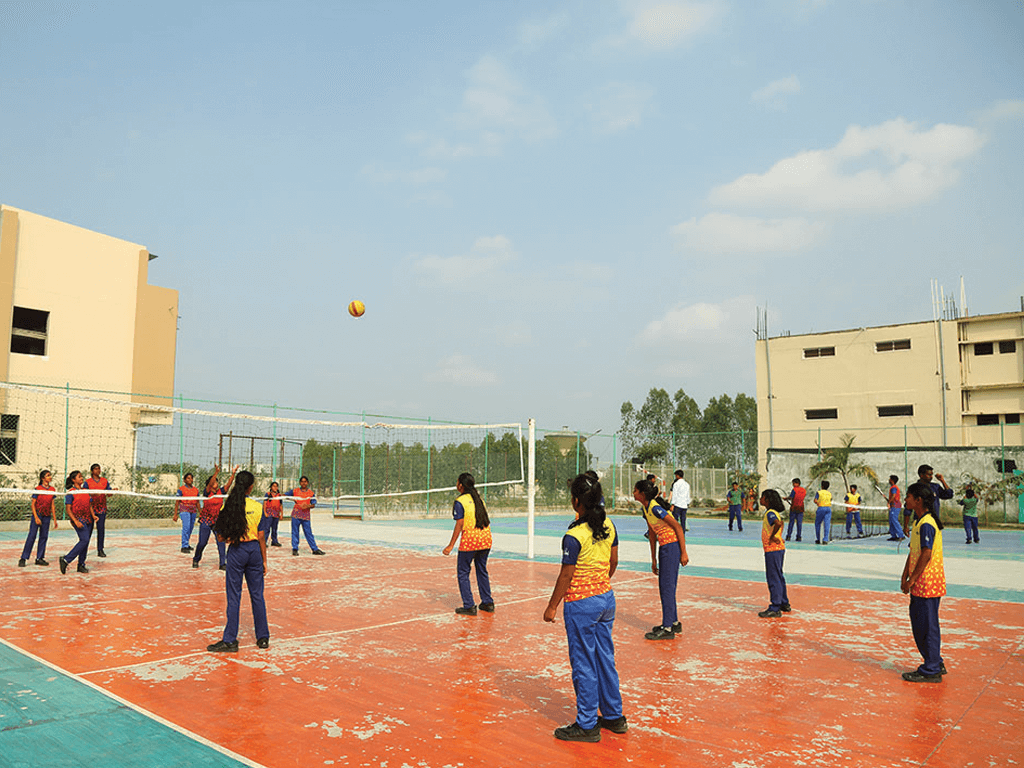 Volleyball is a team sport in which two teams of six players are separated by a net. Each team tries to score points by grounding a ball on the other team's court under organized rules.It has been a part of the official program of the Summer Olympic Games. 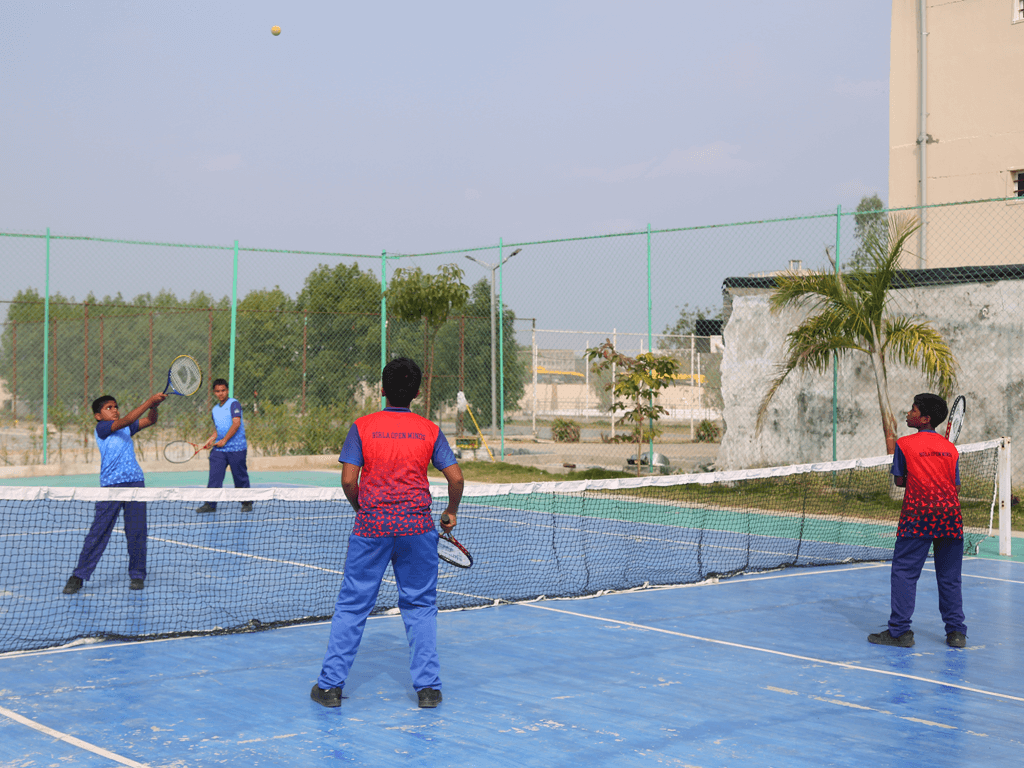 Tennis is a racket sport that can be played individually against a single opponent or between two teams of two players each. Each player uses a tennis racket that is strung with cord to strike a hollow rubber ball covered with felt over or around a net and into the opponent's court. The object of the game is to maneuver the ball in such a way that the opponent is not able to play a valid return. The player who is unable to return the ball will not gain a point, while the opposite player will. 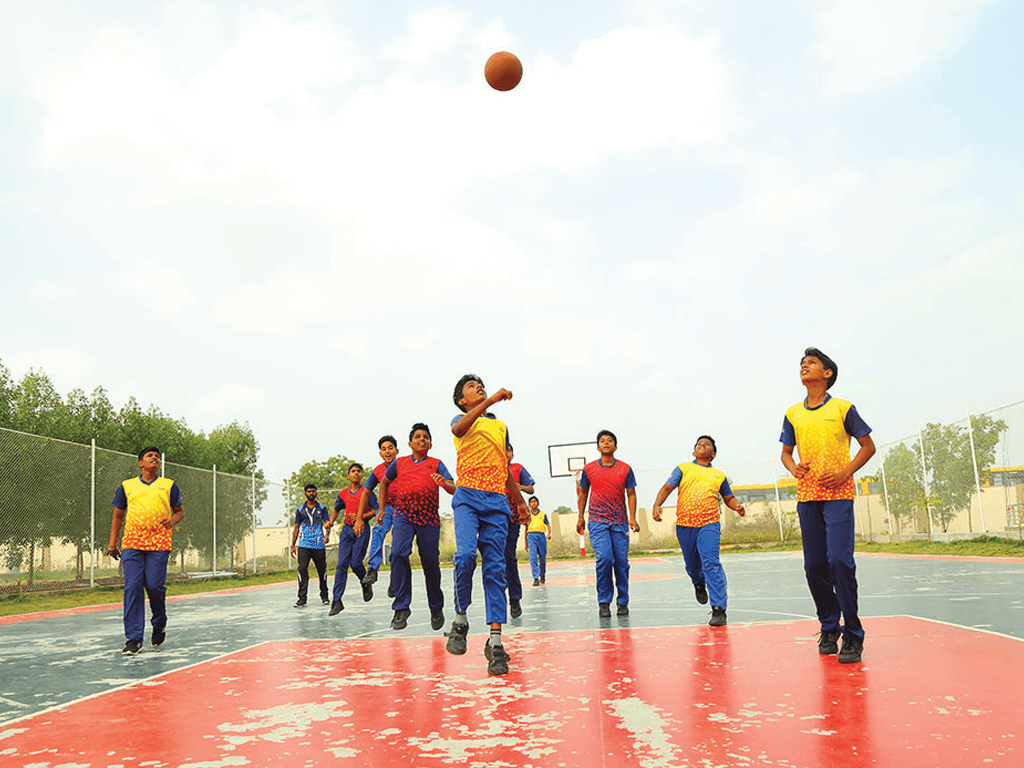 Basketball is a team sport in which two teams, most commonly of five players each, opposing one another on a rectangular court, compete with the primary objective of shooting a basketball through the defender's hoop in diameter mounted 10 feet while preventing the opposing team from shooting through their own hoop. A field goal is worth two points, unless made from behind the three-point line, when it is worth three. After a foul, timed play stops and the player fouled or designated to shoot a technical foul is given one or more one-point free throws. The team with the most points at the end of the game wins. 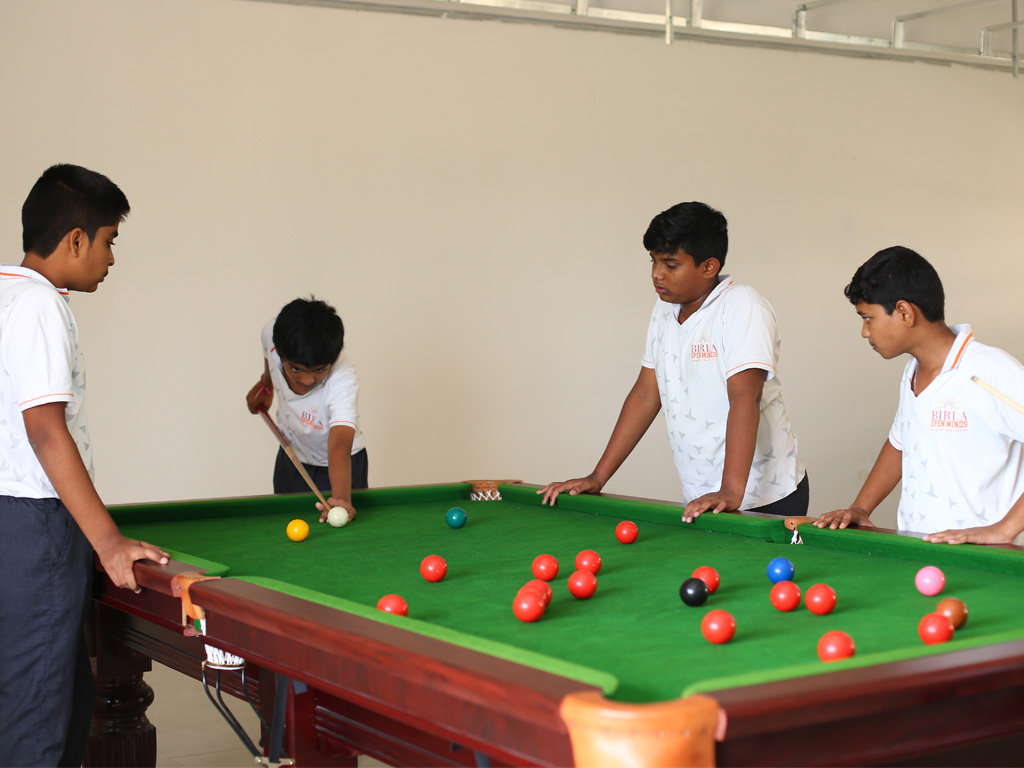 Snooker is a cue sport which originated among British Army officers stationed in India in the later half of the 19th century. It is played on a rectangular table covered with a green cloth, or baize, with pockets at each of the four corners and in the middle of each long side. Using a cue and 22 coloured balls, players must strike the white ball to pot the remaining balls in the correct sequence, accumulating points for each pot. An individual game, or frame, is won by the player who scores the most points. A match is won when a player wins a predetermined number of frames. 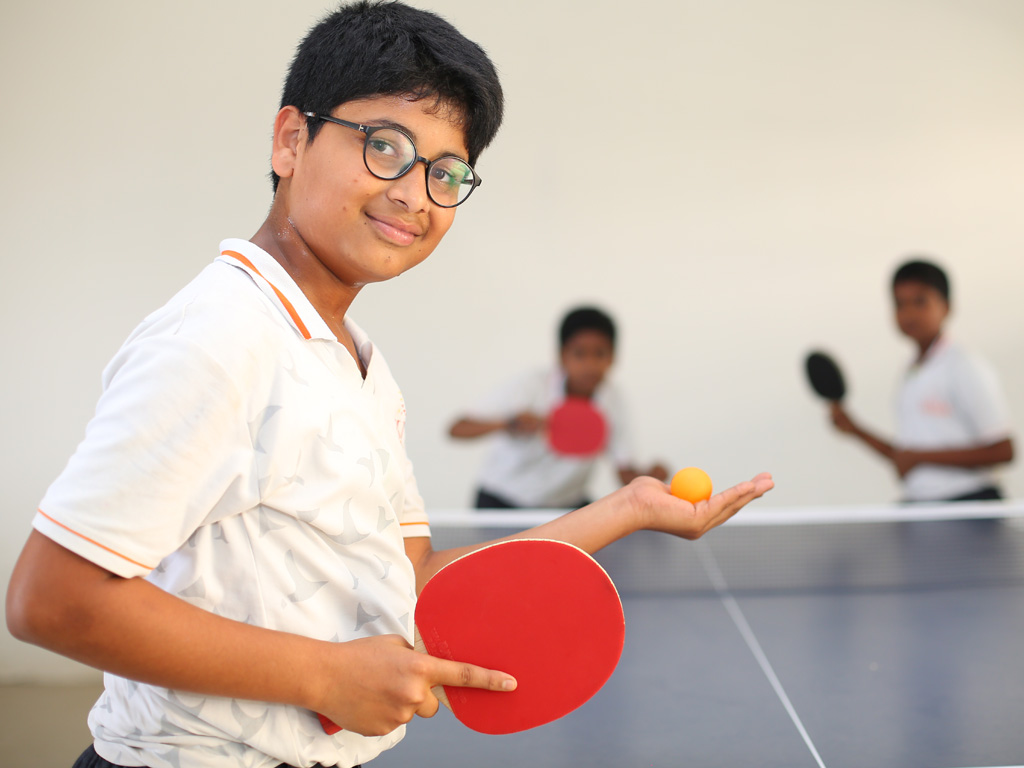 Table tennis, also known as ping-pong, is a sport in which two or four players hit a lightweight ball back and forth across a table using small rackets. The game takes place on a hard table divided by a net. Except for the initial serve, the rules are generally as follows: players must allow a ball played toward them to bounce one time on their side of the table, and must return it so that it bounces on the opposite side at least once. A point is scored when a player fails to return the ball within the rules. Play is fast and demands quick reactions. Spinning the ball alters its trajectory and limits an opponent's options, giving the hitter a great advantage.

Teaching your child to swim and encouraging him to swim regularly can have significant benefits for both his health and safety. Especially on a hot day, swimming is a way to keep cool while encouraging a healthy level of physical and social activity. Swimming provides a more effective workout than some other activities. 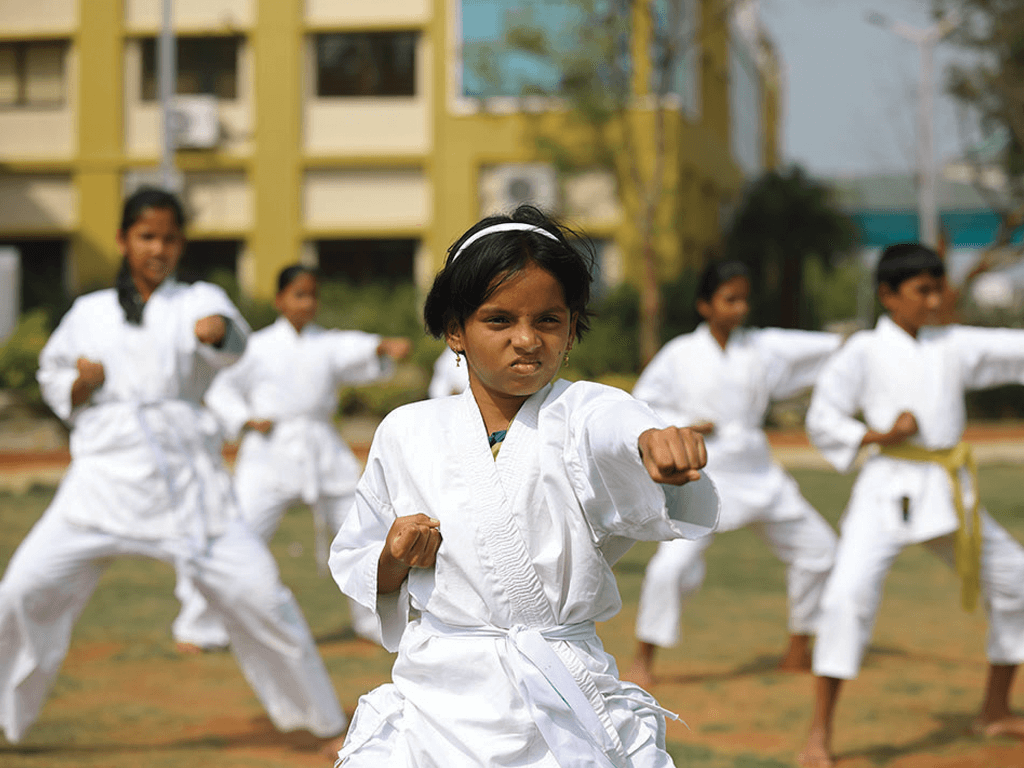 Karate is one of the most widely practiced martial art forms in the world. Martial arts rely on acute physical coordination and mental focus. They were developed in Asia (primarily India, China and Japan) over the course of several thousands of years. In all this time, there have been countless martial arts variations, and there are hundreds of disciplines practiced today. 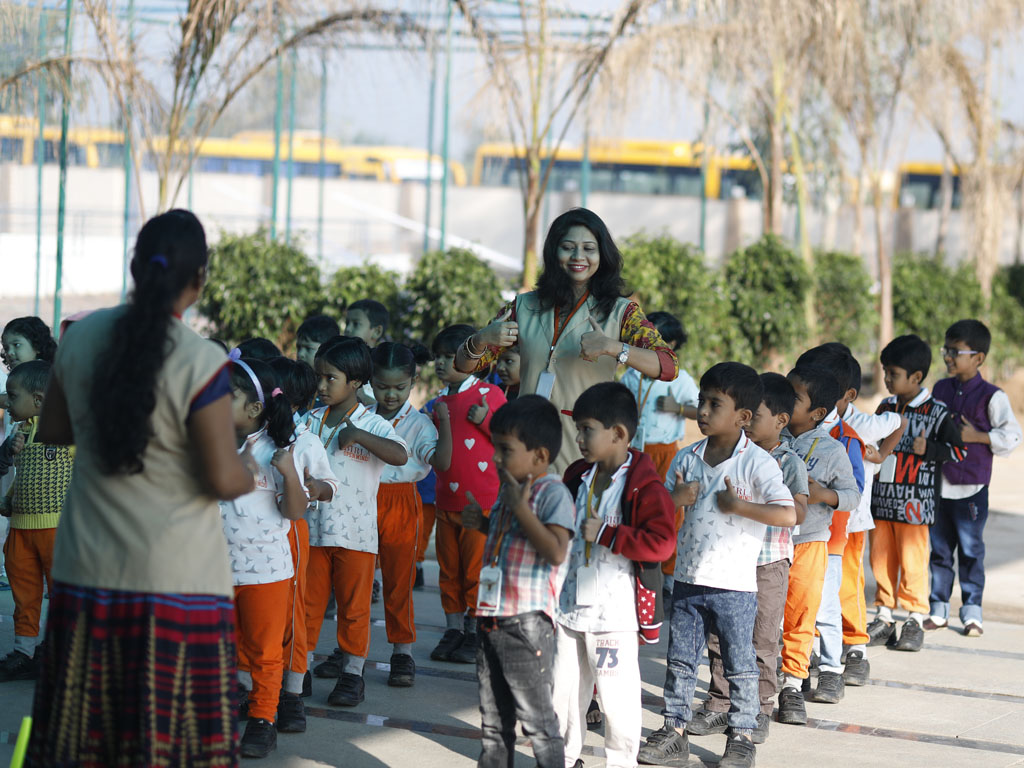 We learn best when we can see, hear, and experience things first hand. Multi-sensory learning is an important part of school life, and school trips answer the requirements of all five senses. It’s because of this that, we arrange trips to help children learn more about the subjects that they are studying. History, Geography, Science and Languages are the most popular subjects for visits, but knowledge trips can be used to support all kinds of subjects .every student require the knowledge, skills and understanding to live in, and contribute to, a global society and this begins with an understanding of the world in which we live, including the languages, values and cultures of different societies. 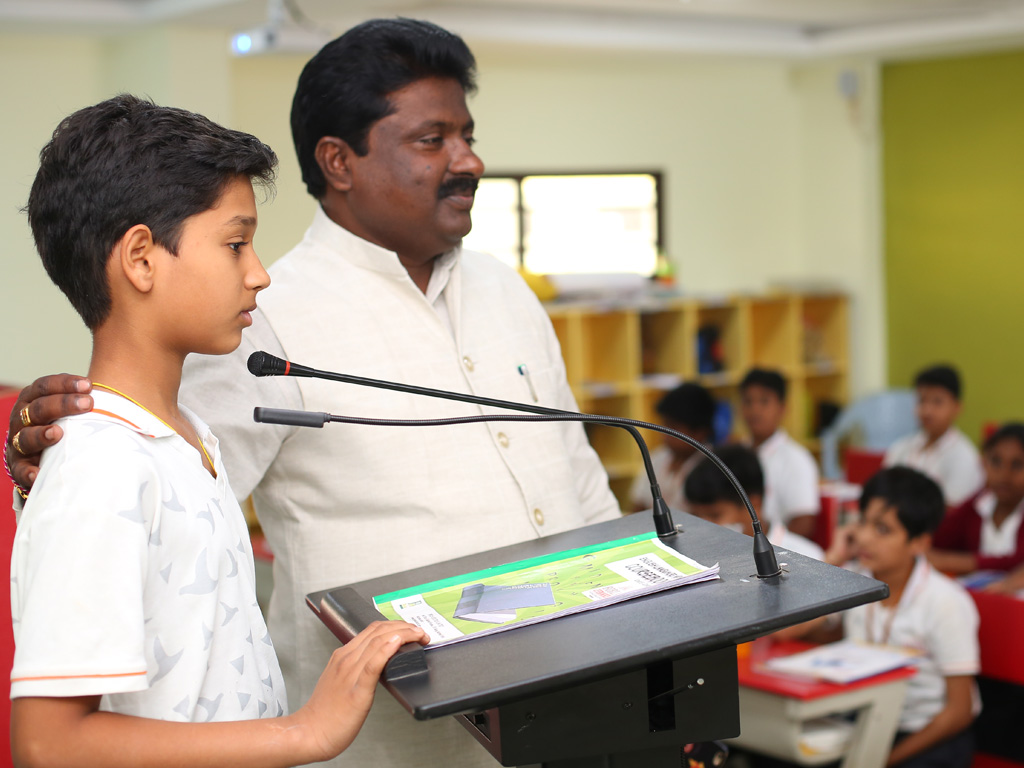 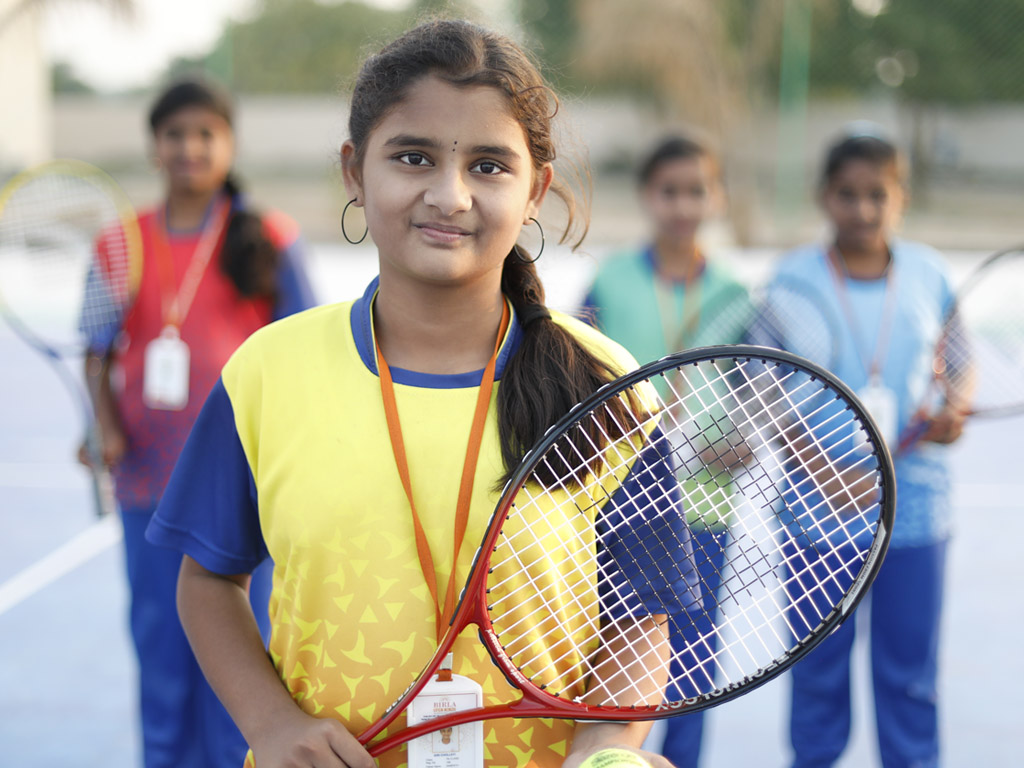 Sports includes all forms of competitive physical activity or games which, through casual participation, aim to use, maintain or improve physical ability and skills while providing enjoyment to children, and in some cases.Hundreds of sports exist, from those between single contestants, through to those with hundreds of simultaneous participants, either in teams or competing as individuals. In certain sports such asracing, many contestants may compete, simultaneously or consecutively, with one winner; in others, the contest is between two sides.